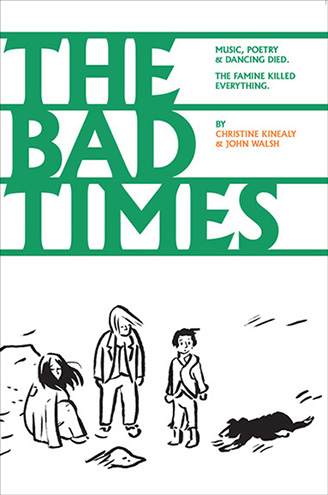 The Bad Times: a graphic novel of Ireland's Great Hunger

by Christine Kinealy and John Walsh

The Bad Times (An Drochshaol) is a new graphic novel set during the Great Hunger, a disaster precipitated by the failure of the potato crop, but exacerbated by the inadequate policies of the British government and the cruelty and opportunism of some landowners and merchants. It takes place between 1846 and 1849. The Bad Times is based on the experiences of three young adults, Dan, Brigit and Liam, who are close friends, and their loyal dog, Cœ. When the story commences, in late summer 1846, the potato crop is about to fail for a second time.

The Bad Times is a story of pain and suffering, but also one of love and loyalty. Brigit, Daniel, and Liam are three teenagers from County Clare in the west of Ireland who live through the horrors of the Great Hunger in Ireland, also remembered by survivors as The Bad Times. The bonds of love and friendship between the teens are put to the test during Ireland's Great Hunger as they each make the tough decisions needed to survive. Their story is movingly told in this new graphic novel by historian Christine Kinealy and graphic novelist John Walsh.

The location is Kilkee, County Clare in the west of Ireland, an area which suffered acutely during the Great Hunger. Irish would have been widely spoken, so Irish phrases have been included to reflect this. A Glossary has been provided at the back of the book.

Christine Kinealy, director of Ireland's Great Hunger Institute, has been named one of the most influential Irish Americans by Irish America Magazine. Since completing her PhD at Trinity College in Ireland, Professor Kinealy has worked in educational and research institutes in Dublin, Belfast and Liverpool. Since 2007, she has been based in the United States. In 1997, Christine was asked to speak on the Great Hunger in the Palace of Westminster, the seat of the British Parliament. In the same year, she addressed an Ad Hoc Committee on Irish Affairs in the U.S. Capitol in Washington.

Christine has published extensively on modern Irish history, with a focus on the tragic period known as the Great Famine or An Gorta M—r (the Great Hunger). Her publications include the award winning This Great Calamity. The Irish Famine, 1845-52 (1994 and 2007) and Making Sense of History: Evidence in Ireland for the Young Historian (1995). Since 2011, Christine has volunteered to teach at the annual weekend Gael Scoil (Irish school) in Lawrenceville, New Jersey, working with young people aged 4 to 17.

John A. Walsh tells stories. Some are told with words; others with pictures. John's stories are told with both. John's passion for storytelling comes from being the youngest of five children, a lifetime of daydreams and from reading too many comic books. In order to tell stories, he has swept church floors, sold women s shoes, designed advertisements and even carried his own weight in fresh fruit. His graphic novel, GO HOME PADDY, about 19th-century Irish immigration to America, is being serialized online. John lives in Boston with his wife and daughter.

"The Great Irish Famine was a devastating, traumatic and transformational event in Irish history. The Bad Times reminds us of the lives so profoundly affected by the Great Irish Famine and the impact on the class system, above all on children. It uses a new medium that will bring us deep into the heart of a tragedy that has left an indelible imprint on Irish society and the Irish people."
— Michael D. Higgins, Uachtar‡in na hƒireann, President of Ireland.