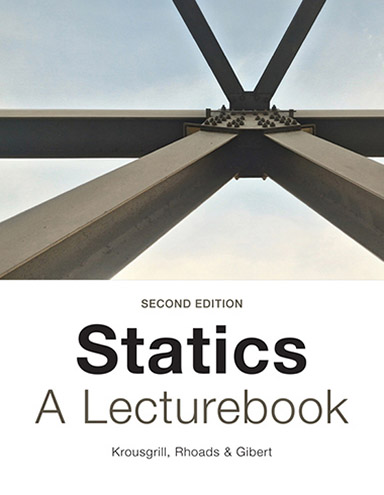 Statics: A Lecturebook is a hybrid textbook/lecture notes set is designed to provide you with an undergraduate-level, engineering-focused introduction to the topic of engineering statics. To this end, the text covers the following key topical areas::

• Equilibrium: including drawing free body diagrams; mathematical descriptions of reaction supports; solving problems of equilibrium of particles and rigid bodies, in both two and three dimensions.

• Friction: including a review of Coulomb's laws of friction; solving equilibrium problems in statics; problems involving slipping vs. tipping; friction in cable/pulley systems; and, friction in systems with wedges.

• Internal force analysis: including the equilibrium solutions of problems involving truss and frame structures, and machines.

• Internal force/couple resultants: including studies of internal resultants in general systems; and, specifcally, the internal shear force and bending moment resultants in beams.

Stylistically speaking, the text provides you with pertinent background information, while emphasizing fundamental engineering principles, conceptual understanding, and optimal problem solving techniques. The Lecturebook also incorporates an extensive array of practical examples with which you can hone your skills. Rest assured that the material included herein will be key to your future success as a practicing engineer.

Structurally speaking, the text is founded upon the aforementioned hybrid textbook/lecture note format wherein most of factual information is provided in full, while brief in presentation, and extended examples are provided with ample white space, allowing you to actively work the problem with the instructor's assistance inside of a lecture environment, or outside of the lecture environment on your own or with the assistance of online videos.

Statics: A Lecturebook is backed by a wide array of multimedia content, designed speci cally for self-paced factual delivery, and ultimately self-learning. The cornerstone of this multimedia content is the set of hundreds of instructor-produced videos, which highlight, in a step-by-step fashion, the problem-solving approaches required for all of the Lecturebook's examples, and the related homework problem sets. Continually updated to leverage the most advanced educational recording methodologies, this content has been proven to be both a favorite with our own students and a very effective asymmetric learning tool. Be sure to leverage these resources as you advance through the course.

Jeffrey F. Rhoads is a Professor in the School of Mechanical Engineering at Purdue University and is aliated with both the Birck Nanotechnology Center and Ray W. Herrick Laboratories at the same institution. He also serves as the Director of Practice for MEERCat Purdue: The Mechanical Engineering Education Research Center at Purdue University and the Associate Director of PERC: The Purdue Energetics Research Center. Dr. Rhoads received his B.S., M.S., and Ph.D. degrees, each in mechanical engineering, from Michigan State University in 2002, 2004, and 2007, respectively. Dr. Rhoads' current research interests include the predictive design, analysis, and implementation of resonant micro/nanoelectromechanical systems (MEMS/NEMS) for use in chemical and biological sensing, electromechanical signal processing, and computing; the dynamics of parametrically-excited systems and coupled oscillators; the thermomechanics of energetic materials (including explosives, pyrotechnics, and propellants); additive manufacturing; and mechanics education. Dr. Rhoads is a Member of the American Society for Engineering Education (ASEE) and a Fellow of the American Society of Mechanical Engineers (ASME), where he serves on the Design Engineering Division's Technical Committee on Vibration and Sound. Dr. Rhoads is a recipient of numerous research and teaching awards, including the National Science Foundation's Faculty Early Career Development (CAREER) Award; the Purdue University School of Mechanical Engineering's Harry L. Solberg Best Teacher Award (twice), the Robert W. Fox Outstanding Instructor Award, the and B.F.S. Schaefer Outstanding Young Faculty Scholar Award; the ASEE Mechanics Division's Ferdinand P. Beer and E. Russell Johnston, Jr. Outstanding New Mechanics Educator Award; and the ASME C. D. Mote Jr., Early Career Award. In 2014, Dr. Rhoads was included in ASEE Prism Magazine's 20 Under 40.