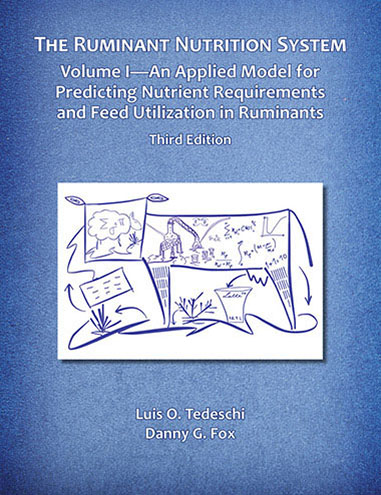 This is Volume I of a two-volume set. Volume II is available here.

The purpose of the Ruminant Nutrition System (RNS) software is to integrate and apply current scientific knowledge and to encourage creative and innovative ideas to solve practical feeding and nutrition problems. This is accomplished by using the accumulated scientific knowledge to establish relational and conceptual links among key variables and quantify their values. The foremost goal in developing the RNS was to provide a framework that could be used for incorporating and implementing new scientific knowledge and submodels to more accurately predict nutrient requirements and biological values for ruminants currently used in food production. The ultimate purpose is to improve animal productivity and profitability while reducing nutrient excretion per unit of production.

This book is intended for teaching and research by faculty and graduate students at the master or doctoral levels in life sciences, animal science, wildlife and fisheries sciences, ecosystem science and management, veterinary medicine, and biology and zoology. This book will also be of use to practicing nutritionists who are seeking advanced information on applied ruminant nutrition (in cattle, sheep, and goats) and to understand biological and nutritional modeling of nutrient requirements by ruminants and nutrients supplied by feedstuffs undergoing ruminal fermentation, postruminal digestion, and absorption.

The goals of this book on ruminant nutrition science are to document information, share knowledge, stimulate thinking and discussions, provoke criticism to build a better system, challenge the system with new discoveries, and foster learning by young students and teaching of scientists for the future.

The first edition of The Ruminant Nutrition System: An Applied Model for Predicting Nutrient Requirements and Feed Utilization in Ruminants was published in October 2016. Since then we have received much positive feedback, which has encouraged us to revise and expand it.

Since the publication of the second edition of The Ruminant Nutrition System: An Applied Model for Predicting Nutrient Requirements and Feed Utilization in Ruminants in January 2018, we have continued to receive encouraging feedback from readers around the world. We learned that The Ruminant Nutrition System book has been adopted as a textbook for advanced courses in ruminant nutrition and modeling. In the third edition, we have thoroughly revised the text, equations, and illustrations for correctness and clarity. Virtually every page had a modification. Sometimes we made a minor correction, but sometimes we rephrased a whole paragraph or updated an illustration.

There are also a few new textual additions. We wrote new sentences to corroborate or supplement the text, highlight pertinent findings from recent research, and provide additional information and clarification while, as much as possible, maintaining intact the structure and pagination of the second edition. We changed the background color of all equations to improve their visibility within the text. We also revised and updated the references by reducing their font size and adding the digital object identifiers when avail-able. We added 55 references to update or support further discussion points, increasing the total references to 2,427. Finally, we added an appendix (page 469) to discuss the laboratory methods for specific chemical analyses, such as of volatile fatty acids, and we plan to expand it in future editions.

Artificial intelligence, a data-intensive computational process, has received growing attention in the last decade, more specifically the machine learning and deep learning approaches. Because farms have been developing large databases, artificial intelligence has gained some traction in agriculture. The publicity around artificial intelligence promotes it as a solution for real-world problems, which may reduce the interest in mechanistic modeling. However, the integration of mathematical modeling and artificial intel-ligence is likely to spur an avant-garde technological wave in predictive analytics (Tedeschi, 2019; Tedeschi and Menendez, 2020), resulting in a paradigm shift in the mathematical modeling domain. This shift will be so great that in the near future we will likely be using hybrid knowledge- and data-driven models. With this in mind, our goal is to make the information in The Ruminant Nutrition System book and the associ-ated computer model ready for integration with artificial intelligence. To facilitate the dissemination of the computer model, we are publishing An Applied Model for Predicting Nutrient Requirements and Feed Utilization in Ruminants (RNS) as Volume 1 and the Tables of Equations and Coding (RNS TEC) as Volume 2 (Tedeschi and Fox, 2020) of The Ruminant Nutrition System publications. Volume 2 contains the calculation of main equations in tabular form and the calculation logic of the computer model using R scripting. It also has a chapter that discusses the basic concepts and ideal ranges of relevant biological indices calculated by the Ruminant Nutrition System computer model.

As in the previous editions, many colleagues were instrumental in providing constructive comments and knowledgeable suggestions to improve not only The Ruminant Nutrition System book but the computer model as well. We are very grateful for their continued support.

Part II. Modeling the Dietary Supply of Energy and Other Nutrients

Part III. Modeling the Animal Requirements for Energy and Other Nutrients

Ch. 18 — The Development of Feed Libraries