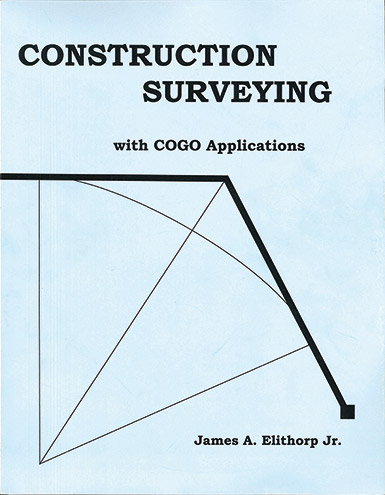 by James A. Elithorp Jr.

The first chapter is perhaps the most important as it covers coordinate geometry. It will facilitate the ability to perform survey computations with pencil and calculator. This chapter details the survey operations of the forward, inverse, line-line intersection, line-circle intersection, and circle-circle intersection. The subject of computation error is explored with a discussion of round-off error, the translation of large coordinates, the arbitrary nature of the sine law, and strength of figure.

Chapter Ten treats construction control from the perspective of the requirement for a geodetic tie and the use of the Global Positioning System (GPS).

This book has been used to teach the construction surveying course at Troy University since 2003, and is now the standard for the four year degree program for the State of Nevada at Great Basin College in Elko, Nevada.

Dr. James A. Elithorp earned a Ph.D. in Geomatics Engineering (1999) and a Masters of Science in Surveying Engineering (1996) from Purdue University; the Bachelors of Science in Surveying (1994) from the Oregon Institute of Technology; the Masters Public Administration (1980) from California State University, Sacramento, and the Bachelor of Arts in Government (1970) from Sacramento State College.

Dr. Elithorp became interested in the study of geomatics as the owner's representative on a hydroelectric plant construction project in eastern Oregon. He worked for the Alaska State Office of the Bureau of Land Management participating in the provision of cadastral surveys in the Alaskan bush. He worked for the Western Region of the Federal Highway Administration doing route surveys for highway construction. Dr. Elithorp taught geomatics courses at Purdue University for a year before accepting the challenge of building the four year Geomatics degree program for the State of Alabama at Troy University. In August 2005, Dr. Elithorp began the challenge of building the four year degree program for the State of Nevada based on a distance learning model.