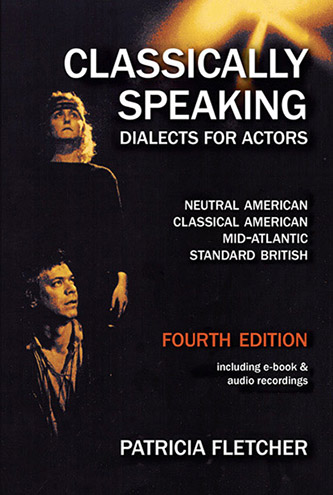 Contact us for more information or to request a desk copy.

Classically Speaking: Dialects for Actors is meant for anyone interested in learning well-spoken Neutral American Speech (aka General American). It is also an effective tool for learning Classical American, Mid-Atlantic and Standard British dialects.

Each Neutral American vowel, diphthong and consonant sound is described, along with an accompanying audio track, and 'sound checks' of common difficulties.  In addition, the International Phonetic Alphabet is covered and practice exercises are included, along with chapters on rhythm, stress, use of the weak and strong forms of words, linking sounds, inflection, pause, literary devices and scansion (for those interested in Shakespeare). Three monologues spoken by professional actors wrap-up the 325 page Neutral American Section.  This is followed by Classical American (88 pages), Mid-Atlantic (16 pages) and Standard British dialects (62 pages), including accompanying exercises, audio selections for each adjustment covered, and three monologues spoken by professional actors for each of these dialects.

When you purchase the textbook you will receive a unique code for digital e-Book access (code found on the inside front cover). The e-Book provides downloadable audio selections which are accessible by simply clicking the e-Book reader app screen. Note: using digital e-Book requires downloading the (free) publisher's XanEdu app. Both the paperback book and the digital e-Book are offered together as a package and are included with your book purchase.

Patricia Fletcher has served as a Voice, Speech, Dialogue, and Dialect Coach for Broadway, Television, and Feature Films and has worked as an actor on and off Broadway. She has taught Dialects, Voice and Speech in numerous professional acting programs including: The New School for Drama, MFA Acting Program/New School University, Actor's Studio Drama School, Mason Gross School of the Arts MFA Acting Program/Rutgers University, Brooklyn College Graduate Acting Program, William Esper Acting Studio, and New Actors Workshop. She is a Designated Linklater Voice Instructor, holds an MA in Voice and Speech from Antioch University, and does extensive private coaching. www.patriciafletcher.com