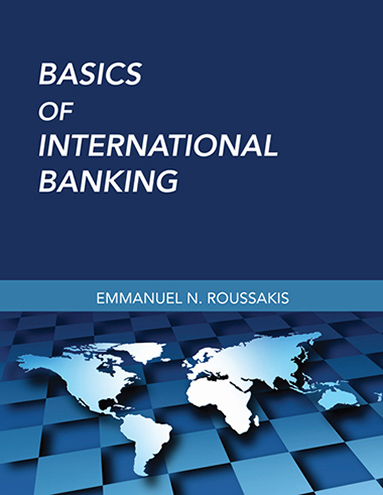 The unprecedented expansion in international trade and investment that the world economy has experienced since the 1990s has contributed to a phenomenal growth in the internationalization of banking activity. New types of services have been introduced; strategies and processes have evolved; the volume of international services has expanded; and the number of banks offering these services has increased. Technology and globalization have been a major force in the transformation of international banking. These important developments have occurred so rapidly that the existing literature has yet to match the significance of this change. This book has been undertaken in an effort to narrow the gap in the literature.

Basics of International Banking is designed for both students and professionals, as well as for anyone interested in the fundamentals of international banking from a management perspective. It has been written with the objective of providing a description and an analysis of some of the more important challenges confronting international bankers today.

Although, in principle, the issues bank managers face can be easily identified and rationally considered, in practice solutions are anything but watertight. In the real world in which the banker operates, applications of the principles discussed in this book becomes an exercise in informed judgment. The principles presented therefore must be viewed as guidelines that will assist the banker in the systematic evaluation of the relevant facts. This book does not provide the final answers, which vary among banks, and even for the same bank, over a period of time.

The book's organizational structure is made up of two parts. Part I provides an overview of the international financial environment in which banks operate and some of the traditional services they extend to their clients. Part II focuses on the principles and procedures in international lending.

Dr. Roussakis is Emeritus Professor of Finance in the College of Business at The Florida International University College of Business, located in Miami, Florida. He is also a recipient of several U.S. Department of State awards-Fulbright Specialist in Tunisia (2020), Kuwait (2017), Morocco (2014), Indonesia (2013), and Russia (2012), Lecturer at the Fulbright International Summer Institute in Bulgaria (2011), and Fulbright Scholar in Romania (2010).

Dr. Roussakis has taught at American universities in the United States and Europe, worked for American and European banks, and served in an advisory capacity to government agencies both in the United States and abroad. He participated in the negotiations for Greece's admission to the European Economic Community in the area of commercial banks and banking policy.  He was co-recipient of a Florida State Research (STAR) grant for the study of international banking legislation and taxation; study recommendations were the basis for legislative changes implemented in Florida in July 1979 and June 1980 respectively.

Dr. Roussakis has authored several books and published widely in academic journals in the United States, Europe and Latin America.

During his tenure at Florida International University, he was instrumental in establishing the department of Finance, developing its banking curriculum, and directing certificate programs for professionals in the financial industry.  For his many and varied contributions to FIU and the community at large, he received 9 awards for exceptional performance in teaching, scholarship and service. He served as department Chair (2000-2003), and was recognized for his sustained contributions in the field of international banking through the award of the Florida International Bankers Association (FIBA) endowed chair in Finance (1999-2003). He contributed in the development of the College’s graduate programs downtown by serving as the Director of the Professional MBA, and the Master of Science in Finance (2006-2010).

Although associated with FIU since 1976, in the course of a three-year interval (2003-2006) he was Dean of the School of Business at the University of Nicosia, the largest private graduate and undergraduate educational institution in Cyprus.

He speaks fluently English and Greek, and has knowledge of French, Spanish and Arabic.

Part I — Development and Functions