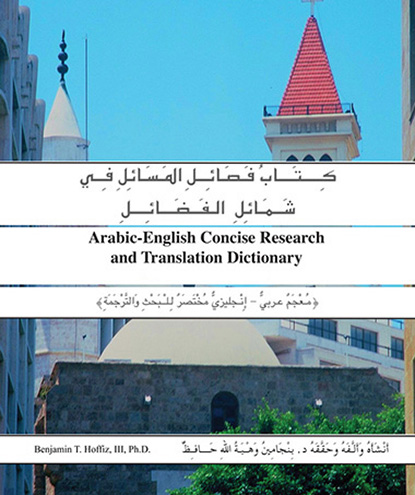 This dictionary contains more than 7500 entries, based on more than 2000 Arabic roots.

All Arabic entries are fully-vocalized and in many cases examples in use are provided for added clarity.

Each derived verb is clearly-labeled for its form (measure), normally forms 2-9. Quadriliteral forms, both standard and derived, are also identified.

Entries have been obtained by intensive screening from a wide variety of Arabic sources, including classical and Islamic texts, novels and historical works, and current Arabic news media coverage and commentary. The vocabulary covered includes many new terms and recent neologisms common in modern use, but heretofore not commonly-defined or glossed until now.

At the beginning, a comprehensive explanatory section with explanations is provided. Many examples illustrate salient issues which enables the user to navigate the dictionary according to the Arabic root system and its derivations.

Benjamin Hoffiz is an Assistant Professor of Arabic Language at Embry-Riddle Aeronautical University in Prescott, Arizona where he teaches the four main content areas of the Arabic language (Reading, Writing, Speaking, Listening) with emphasis on communicative speaking and grammar skills, and Arabic vocabulary.