“Social Studies is under such intense scrutiny these days,” Conklin said. “I viewed this student book as an ongoing opportunity to convince people that Social Studies is still relevant, and that it’s important for students to learn history – including state and local history - from different perspectives.” 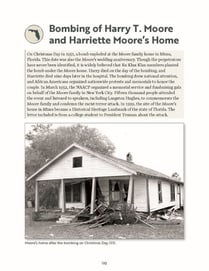 Conklin, a lover of history from a young age, serves as the Supervisor for K-12 Social Studies for Florida’s Duval County Public Schools. In this role, which Conklin calls “a dream come true” and a career goal, she oversees the direction of the Social Studies curriculum for more than 200,000 students in the nation’s 20th largest school district. As the main coordinator for the district’s Social Studies program, Conklin recognized that incorporating local history into the curriculum would not only help students better understand the historical significance of the area where they lived, it also paved the way for increased student engagement and more positive learning outcomes.
The issue, Conklin noted, was finding relevant, Florida-focused materials. For example, a textbook was never adopted for the district’s high school-level African American Studies elective. “All the available textbook options were someone’s opinion or interpretation,” Conklin said. “They were either not the right level or too biased, or they included things that weren’t appropriate for high school learning.”

With state mandates requiring the teaching of African American studies in K-12, Conklin knew finding a resource to check all the necessary boxes – for the school board, administrators, teachers, and students – wouldn’t be an easy task. Conklin needed a unique resource that would support the African American Studies requirements, while at the same time introducing the contributions and experiences of African Americans in Florida.

“Our students didn’t know about local African American history,” Conklin said. “They didn’t know that “Lift Every Voice and Sing” was written here in Jacksonville, for example. That’s really what motivates me as an educator – seeing students in the classroom, engaging with and understanding not just history, but local history.” 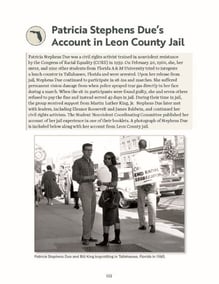 Conklin realized that for the high school African American Studies elective, custom content creation was the only answer. She asked the XanEdu curriculum development team to help her create a personalized learning tool: a collection of primary and secondary sources with a Florida-specific, local focus. The XanEdu team took Conklin’s request - to put together a resource that would challenge students and fulfill state requirements – and, using the course’s units of study, began researching, compiling, and creating both a print and digital version of a resource rich with state and local history.

“I wanted to make sure the text included really unique resources – the kind that you might find in the basement of the Smithsonian - that weren’t readily available otherwise,” Conklin said.

Would you like a PDF sample of the DCPS  student book?

XanEdu worked with Conklin to research and collect obscure but historically significant source documents, including a press release from Ax Handle Saturday, which occurred in Jacksonville in 1960 when a group of white men attacked African Americans engaged in a sit-in; a biography of Eartha M.M. White, an African American philanthropist and humanitarian; and information on Aaron Anderson, the country's first African American recipient of the Medal of Honor. The student book uses an icon of the state of Florida to call out these state-specific stories, events, and people, and incorporates these primary and secondary sources, such as newspaper headlines, interview transcripts, photographs, maps, official documents, and census data, to illustrate African American history that happened in Florida to Floridians.

Conklin acknowledges that while she always had the support of her district leadership, the increased politicization of social studies education meant she had to overcome some concerns about the materials in the book. “We had to demonstrate that these resources link directly to the standards and requirements given by the state of Florida,” she said. “Once our board members saw that the student book was a compilation of primary and secondary sources, they realized the value of the student book and now, everybody seems to love it! The colors, the maps…I’ve been in the classroom and have watched students just pore over these resources!” 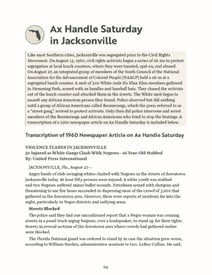 Conklin added that even though she’s heard positive feedback from her district leadership, administrators, and teachers, it’s the response from the students that thrills her most. “Watching students dive into the student book reassured me that we had created a resource that would capture our students’ attention and make them more interested in learning about local history,” she said.

The African American Studies course, and the student book that goes with it, has been so well received that a middle school in the district is piloting a version of the course for its accelerated students, and there is talk of creating a similar student book for elementary schools. The student book is available in both digital and print version, and Conklin is exploring whether making the print version a consumable – something students can highlight and mark-up – would increase comprehension and raise test scores. Another indication of the student book’s success, Conklin notes, is that it could put the district in a position to achieve flagship district status from the state’s African American History Task Force, which already has awarded the district “exemplary status.”

“I get really excited about these projects,” Conklin said. “XanEdu made it easy to bring my passion to life. They did the heavy lifting - I gave the XanEdu team my vision, and they worked their magic and delivered!”

Would you like a PDF sample of the DCPS  student book?

Webinar Series: Tactics to tackle what’s most pressing for educators

Join our sister company Education Elements for a webinar series to understand the issues educational leaders cite as the most urgent based on a national poll. We'll share approaches that leaders are implementing and considering. These approaches include customizing and supplementing the curriculum.

Authoring Student Success: The Power and the Peril of Customized Curricula for K-12 Schools.

Copyright Matters: 10 Things Every K-12 School District Should Think About